Filtering Social Network Connections: A tough decision, but should be made 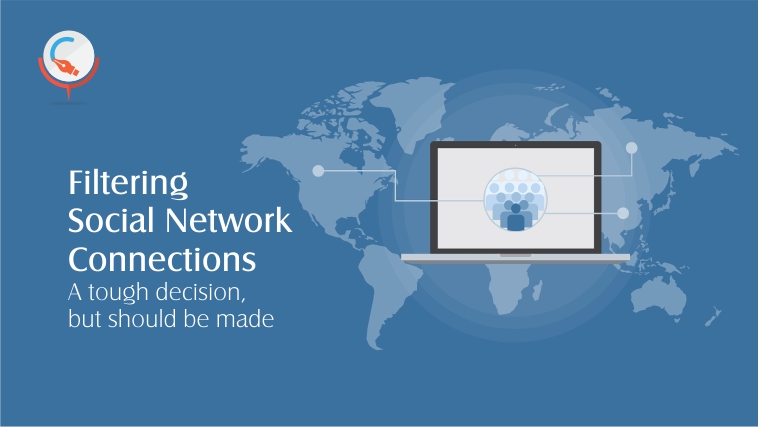 I moved to Poland, at the end of September 2017, to further pursue my passion of teaching & researching in Social Media. Since my move here, it has been very interesting to notice the change in the frequency and level of communication I have had with the members of my social networks. There has been an increase with some, while it has diminished with others. Pondering upon the point of balancing the number of people in my social networks and who should be part of it, has always been a fascinating debate for me. Recently, for one of my research studies, I personally contacted a large number of people from my network and the responses were thought provoking. I felt that these thoughts would be a good read for all social media users, hence why I penned this article.

Friends, colleagues, students and family members, with whom I have regular interactions (in real life or on virtual platforms), responded immediately and acted upon the request of contributing towards the research. They also were instrumental in spreading the word further to some people in their network and their responses were quick and effective.  Moreover, for getting the responses, it was not required to contact them via personal message, rather, they responded to the post(s) in the newsfeed or in the groups (Facebook and LinkedIn, in particular). I have always emphasized in my training of ”effective use of social media” that, for an individual’s virtual personality, the internal social network (his/her internal circle) is the most important, because it defines how much an individual can achieve through his/her social network. These people care about your presence in their personal and social networking lives, hence making them the most important part of one’s personal, professional or social circles (both in the virtual and real world). Here, I would mention that I am fortunate & blessed to have a good number of nodes in my internal social network.

These constitute of connections on social networks, who are connected with me directly on social media but are not in touch on a regular basis.  There was minimal response from these connections via newsfeed, thus establishing contact with these groups through personal messages was approached on a more frequent basis. In general, they didn’t respond to the messages, even after viewing it, but there were exceptions. Some of the responses were immediate and they helped in further spreading the word to their own connections. These are important as well, because more distanced networks usually are comprised of more members than the inner network and can act as a huge influence over the spread of the content shared as a public post.

These constitute people who are not directly connected with me nor my immediate networks and we typically don’t maintain contact after that one meeting at some event, training or just an online discussion through some group or post. As the survey for my research was anonymous, I couldn’t determine whether they responded to the survey or not but, I did notice from the post reactions, that there were no respondents from this level in my network. It was surprising that everyone, to whom I wrote a personal message, responded to it. It was surprising because their responses were better than the intermediate network, in terms of response rate as well as time taken to respond. This also had a positive influence over the posts I made in the next few days, as I saw that there were reactions/comments from some of them.

Usually, on LinkedIn, I tend to accept the majority of connection requests from genuine profiles, whereas, on Facebook, I have been very vigilant about not accepting or sending requests to people whom I don’t know personally. This was not the case a few years back, where I accepted all requests on all platforms. As social networks evolve more and more, I feel that people who can optimize the connection on their social network would definitely gain a high net-worth when it comes to knowledge as well as influence. I have decided to filter and optimize my network further and I think you should do it too! Soon, I will share some recommendations on how you can get started. If you wish to receive them as soon as they are published, you can leave your email address, here.

Until then, please share your views about these observations through comments or email !

P.S.: Please if you can spare a few minutes to fill out a research survey for us, it would be really helpful. In India | In Poland

Multidisciplinary Studies – A need for Careers of tomorrow